I’ve been having deep thoughts lately on the importance of speaking up. They’ve been triggered by two recent instances, one based in my acting life, and the other in my writing work. 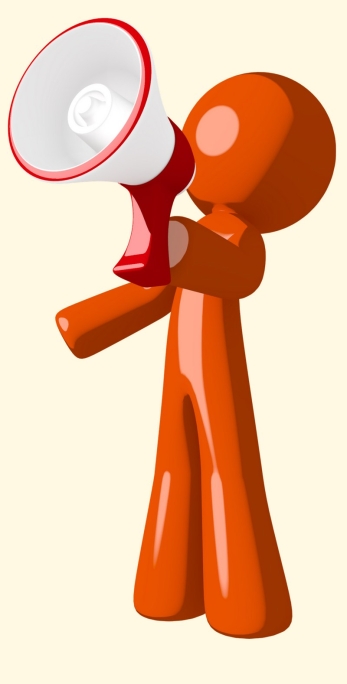 In the first instance, I was performing in a theatrical production and a technical glitch caused an unsafe situation on stage. To be specific, a large, center-stage trapdoor that allowed access to an elevator shaft had jammed in the open position during the transition into the show’s final scene. As a result, there was a gaping hole in the middle of the stage as the final scene began. The actors entering the scene were unaware of this hole.

I happened to be in the stage right wing, waiting for an entrance, when I heard someone – either a crew member or an actor exiting the scene – say “the sun roof is open.” (We called it the sun roof because it worked like one: that section of the stage deck lowered slightly and then slid beneath the deck, clearing the way for the elevator to rise.) I could see the opening in the stage as the lights came up, and both the crew and fellow actors in the wings were hissing to each other about the situation, but no one seemed to be doing anything. I turned to the assistant stage manager and said “We need to hold.” The ASM was on headset and didn’t seem to hear me, so I called her by name and said, “Tell the stage manager to call a hold.” *

Meanwhile, in a fairly dim lighting cue, the actors onstage were moving toward the hole. I repeated that we needed to hold, keeping one anxious eye on the onstage activity. I was ready to call out, but just then the actors noticed the hole and adjusted their staging to move past safely. A moment later, the trap door slid shut.

All told, the trap was open for about one minute, but it seemed like an eternity. At the show’s conclusion, I headed down to the dressing room, stewing about what had happened. Since I was the actors’ union representative (or “deputy”) for the production, I knew I would have to speak up. My opportunity came when the stage manager put his head into my dressing room to give us the next day’s call time. When he was finished, I asked him why he hadn’t called a hold when there was a dangerous situation on stage. He told me he was aware of the situation and was poised to call that hold, and reassured me that no one had been in any real danger.

I disagreed, but rather than pursue the issue with him, I decided to take it to the next level. When I got home, I emailed both the theatre’s artistic director and company manager, apprised them of the situation and asked them to take action. Their response was both prompt and gratifying. The upshot was that when we had further issues with the trap door during the final week of the run, those issues were dealt with in a much more safe and satisfactory manner.

So – long story short – I spoke up. First, it was my job as deputy to look out for the safety of my fellow company members, both union and non-union. Second, I have been involved with productions where people didn’t speak up, and accidents occurred and people got hurt – some seriously. And in those situations, people didn’t speak up for one of two reasons:

Reason #2 is the one that’s harder to deal with. Everyone fears repercussions for speaking out, and those fears are sometimes quite real: in another production in which I was deputy, I had to go to the union over a safety issue that the theatre was refusing to address. Under union pressure, the issue was resolved, but I was the unhappy recipient of a pretty nasty email from the director as a result. Did it upset me? You bet it did. In the show biz world, no one wants to be labeled as a “difficult” actor – meaning someone who complains, is high-maintenance or just doesn’t go with the flow. If you’re labeled as “difficult,” that means you might end up on someone’s DO NOT CAST list (and if you in the business think those lists don’t exist, you’d be wrong.) Every actor is always looking ahead to the next potential gig, and if they think speaking up might hurt their employment chances, then they won’t speak.

But in situations like this, deputy or not, you MUST speak. Sometimes you must speak loudly and repeatedly, but you MUST SPEAK.

On the writing side, the situation was a bit different. On Twitter a few days ago, a post about a short story competition was showing up repeatedly in my feed. (It’s a “promoted” post so that’s probably why.) The sponsors of the contest were offering sizeable monetary prizes – from $5,000 to $125 for the top ten winners – and they were getting an enthusiastic response to their Tweet from writers eager to enter, so I took a look at their website.

I was not surprised to see an entry fee of $17. That may sound like chump change to some of you, but for writers (who are often as impoverished as actors are – wonder why I’ve chosen two careers with that attribute?) it’s a fairly sizeable sum.

It’s a fairly sizeable sum for the contest sponsors, too. Take that $17, and multiply it by, oh, let’s say 1000 eager writers, and you’ve got $17,000 – which will cover your prizes with a good bit left over. In other words, your contest is actually a revenue stream – a stream coming from your willing target audience.

This kind of contest is rife in the writing world. It has the same attraction as a multi-million dollar Powerball drawing, with about the same odds of winning. There’s also the added enticement of getting your story published. More experienced (and grumpier) writers generally shrug these things off and go about the real business of writing, which is to write your thing and submit it to a publication, which will then maybe buy it from you and publish it. You don’t pay them, they pay you. But for writers without a lot of publication experience, contests like these can be like a siren call:  Money! Publication! Fame! Look, Everybody, I’m A Real Writer! And all for the low, low price of $17!

So – I was cynical already as I read the contest details. But as I dug deeper, I found (in very small print) a link to the contest’s Terms & Conditions. And look what I found there:

The somewhat oddball syntax aside (I believe the contest sponsor is based overseas), this is what this clause means: SIMPLY BY ENTERING THE CONTEST, you are giving the contest’s sponsor the right to use your story, change your story, and generally do whatever they want with your story, for free, in perpetuity.

Think about that. You’re giving this sponsor $17 to TAKE YOUR STORY FROM YOU.

Now, being a grumpy experienced writer, upon this realization I could have just rolled my eyes, closed out the contest website and stepped away. But I kept thinking about all those sweet, naive writers who had responded so eagerly to the Tweeted contest announcement – not only that they were going to enter, but tagging fellow writers so they could enter, too.

I went back to Twitter, found the contest announcement, and Tweeted this:

And then I went to the sponsor’s Twitter page and posted this: 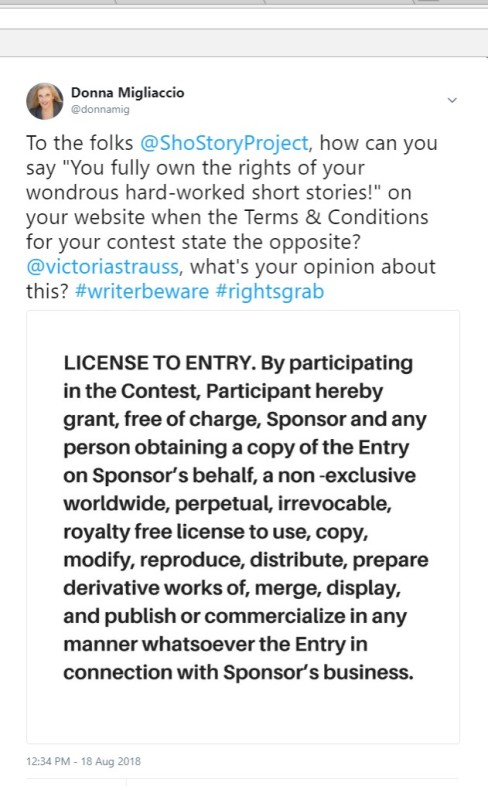 The individual I tagged in the second Tweet, asking for her opinion, is Victoria Strauss. She runs Writer Beware, an entity sponsored by the Science Fiction and Fantasy Writers of America (SFWA), a watchdog organization not just for SFF authors, but for writers of every genre. Victoria then had a look at the site, found other warning flags and will be writing a blog about the contest next week. She has a much bigger reach on social media than I do, so I’m glad she’s getting involved.

The other, more unexpected result of the first Tweet is that it’s been getting a lot of retweets by other authors – so the word is getting out that this contest may not be such a great opportunity after all.

Who knows what the upshot of this kerfuffle may be? I don’t have a dog in this race – I certainly wasn’t going to spend $17 to enter the short-story contest, and part of me also feels like people dumb enough to enter without reading the fine print deserve what they get. But I couldn’t stand by and watch others potentially lose their “wonderous hard-worked stories.” I didn’t HAVE to speak up – I’m not a deputy for the writers’ union (even if there was such a thing, and oh, how I wish there was). But I spoke up nonetheless.  Because in this instance, speaking up was the right thing to do.

This has been a particularly long blog post (probably what the late, great Ursula K. Le Guin would have called a “bung puller” – I haven’t blogged in a long time and was overdue for one). I may post updates once Victoria’s article comes out, but meantime, I’m going to conclude with this quote from Eckhart Tolle:

To complain is always nonacceptance of what is. It invariably carries an unconscious negative charge. When you complain, you make yourself into a victim. When you speak out, you are in your power. So change the situation by taking action or by speaking out if necessary or possible; leave the situation or accept it. All else is madness.

* In stage jargon, to “call a hold” during a performance means the stage manager will make an announcement over the theatre’s PA system to “HOLD.” This announcement is audible to both the onstage company and those backstage, as well as to the audience. The company knows this means to stay where they are and wait for further instructions. Usually these problems are technical in nature, especially in this era of automated sets, but sometimes a hold can occur if someone has been hurt, either onstage or offstage. No one ever likes to hear the word “HOLD.”

ADDENDUM: Victoria Strauss of Writer Beware weighed in on the questionable clause in the contest’s Terms & Conditions (and found another sketchy clause as well): CONTEST CAUTION.