The 10/12 rehearsal days continued from February into the beginning of March and our first preview was looming large on the horizon. That date – March 7th – also marked the official start of the term of the year-long contract most of us had signed. (I know – it’s weird that the contract didn’t start with the first day of rehearsal back in January, but apparently that’s SOP on The Broad Way.) Our days were mostly spent working specific scenes, and after the dinner break the company would try to do a run – initially of the acts, eventually of the entire show. 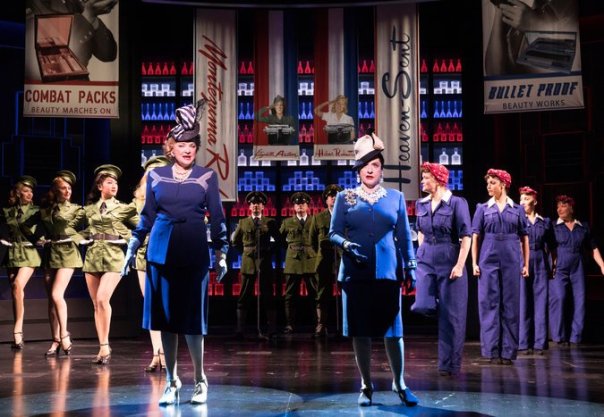 “Necessity Is The Mother of Invention” from Act II, with all its banners. (Photo by Joan Marcus)

Two big issues still dogged us as we moved toward the 7th: the set and the length of the show. In regards Issue #1, it was still a question of too much set in too little space, and the transitions from one scene to the next were taking too long. The intermission changeover was particularly problematic. The Nederlander simply didn’t have enough rails to accommodate all the banners, signs and other pieces that needed to be “flown” into the set, and replacing the Act 1 fly rail items with those for Act II was a tedious process that had to be achieved by hand; i.e. untying all the unneeded banners and rolling them away neatly, then tying the new banners on. During the first full run of the show, that changeover took 30 minutes.

Everyone was working so hard on streamlining those changes, and for Patti Cohenour and me, that meant many hours of standing in for the two stars while transitions were rehearsed. Complicating matters for us were our costume fittings. Patti C. had some usable costumes from War Paint‘s Chicago tryout, but I was being fitted not only for an entire set of the Helena Rubinstein costumes, but for wardrobe for my three ensemble tracks as well. Sometimes my fittings were away from the theatre, at the studios where the costumes were being constructed, but more often Patti C. and I had our sessions with costume designer Catherine Zuber and her staff in the VIP room of the mezzanine lobby.

The VIP room was not a big space to start with – it was designed simply as a place for celebrity guests to wait before the show and during intermission, so they didn’t have to mingle with the hoi polloi. Now, filled with costume racks and sewing machines, it was cramped and stuffy. It was also, unfortunately, the only way for some of the Nederlander staff to access their offices, so we were frequently interrupted in the middle of a fitting by someone needing to pass through. Most of my fittings ran between an hour and a half and two hours, and were usually scheduled first thing in the morning. It never failed, however, that halfway through the fitting I’d be standing there in my underwear and towering show shoes, with costume parts pinned all over me. when an assistant stage manager would burst in with an urgent summons to the set: “Michael needs Donna NOW.” We’d rush through the rest of the fitting, I’d yank my clothes back on and report to the stage, where I’d run transitions until the director was ready to move on. I didn’t mind – I was much happier on my feet working than sitting in the mezz – but it made Cathy Zuber crazy and once again, I wasn’t getting my scheduled breaks. I finally spoke to the stage manager, who advised me to take a break after my fittings even if I was wanted on stage. That translated to hiding in the mezzanine ladies’ room with my aching feet propped up and a cup of water in my hand for ten minutes, because if I went into the house, I’d be spotted and put to work. 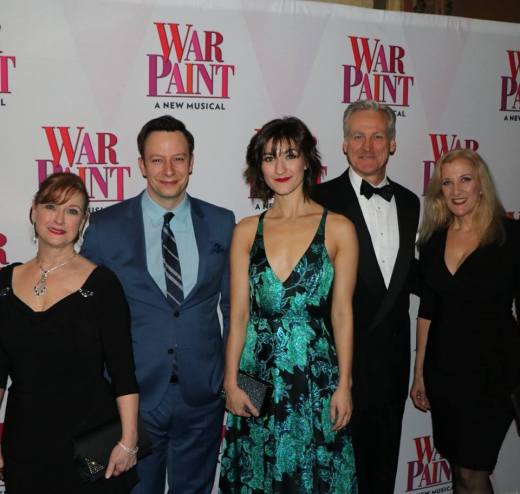 As to issue #2 – the length of the show – cuts and changes continued apace, through tech and right into previews. Every day there were little nips and tucks: a line deleted here, a musical interlude eliminated there. Some of the ladies of the ensemble began to look glum as their specialty bits and solo lines were sacrificed on the Altar of the Clock. (I was particularly sad to see the demise of a gloriously liquid harmony section sung by the Arden Girls as the prelude to “Step On Out,” the big first-act dance number led by John Dossett and Douglas Sills.) It was hard on everyone, keeping up with these changes. Once we’d had our first preview, the rehearsal day changed somewhat: five hours of rehearsal, which led into the dinner break and thence to the half-hour before curtain. Most of the cast brought their meals, ordered in or ran out to grab a bite, then tried to get some rest. Both Patti C. and I had sublet apartments a few blocks from the theatre, so we were able to go home to eat during the break. The stars had their own dressing rooms, of course, and the ensemble men (all three of them, plus the two male swings) had a dressing room equivalent to the one the eleven ensemble women shared, so they were fine – but the ensemble ladies and the crew weren’t so lucky. It was common to see people stretched out in one of the theatre boxes, or on the floor of the mezzanine, or a sofa in the upper mezz lobby. The little fold-out foam mattress in the ladies’ dressing room was always in use, as was the elderly chaise parked on the 5th floor landing.

Eventually, as the show got tighter and smoother, the rehearsal hours got shorter – for the rest of the cast, that is. For the understudies, our day was still just about as long, because when we weren’t called to stand in for more transitions and tech work, we started being called for understudy rehearsal. Now, at last, I got a chance to step through the ensemble numbers and scenes I’d only been able to watch. It wasn’t the same without the rest of the cast and our time was limited since the crew often needed the stage for work calls – but at least it was something. During the preview performances the understudies usually watched from the back of the house, along with the directors, designers, creatives and producers. That was a show in and of itself. If something went wrong – a set piece was late, or a lighting cue was missed, or someone’s body mic started feeding back – the people at the back of the house would pace, or curse, or huddle together by the door and hold a heated conversation in what I can only describe as a screaming whisper. I always tried to slip into the shadows when that happened.

But eventually, after a solid month of previews – we arrived at our April 6th opening night. I went to the theatre early in the afternoon, to put cards and little gifts on my fellow cast members’ stations (an opening night tradition), then returned that evening with my husband John, during a torrential downpour. I signed in at the callboard, climbed the stairs to the fifth floor, looked at the cards and presents that had been given to me and wished everyone well, then retreated to the house, where John and I, along with the other understudies and their spouses/dates, were seated in the mezzanine. It looked very different from the place where we’d spent the last month and a half. The show was well-received by an enthusiastic audience, and the after-party at Gotham Hall was splendid, but everyone was tired. The tech and preview process had been long and exhausting, and for the two stars, the work was far from over. Both Ms. LuPone and Ms. Ebersole had been giving interviews and making appearances in the run up to opening, and that wasn’t going to stop for a while yet. In addition, the onstage cast would be summoned to the recording studio all day Monday, April 17th to record the War Paint cast album. Oh, and by the way, the show had opened a few weeks before the Tony Award eligibility cut-off date of April 27th, so the show would need to be at top form while it was under the nominators’ scrutiny.

It was good to be finished with the long, long days in the mezzanine. Yes, my costume fittings were still ongoing (only about half of my Rubinstein costumes were finished), and we’d be having understudy rehearsals twice a week, and I’d still have to be at the theatre for every performance, but it was all going to be so much easier now. All the ladies I understudied were doing well and sounding great, and I heaved a sigh of relief and got ready to settle into something resembling a routine. I wasn’t worried at all.

I should have been.