Before I continue this narrative, I should tell you a bit about our rehearsal space. War Paint spent its first few weeks of rehearsal in the basement of The Church of St. Paul the Apostle, which is at 9th Avenue and West 59th Street in midtown Manhattan. If the word “basement” brings up visions of a cramped, dingy and dank space, let me assure it was not (unlike our theater, which I’ll get into later). That basement is used to rehearse the Radio City Christmas show, so it’s absolutely enormous. There was not only room for our taped-out playing area, there was space for a long row of tables facing it for the directing team, the choreography team, the creatives, stage management and way over at one end, the understudies. Behind this long row of tables ran a row of cubicle dividers, creating a “hallway” between the rehearsal space and the rear wall so that people could get to the bathrooms without disturbing anyone. Beyond the understudies was space for a grand piano and a table for all the music team. Elsewhere in the space was a separate studio where smaller scenes and music could be rehearsed, and private rooms for the stars and the two leading men (John Dossett and Douglas Sills). A third of the space was taken up by a huge “green room” area with couches, tables and a big kitchen area with microwaves, refrigerators and the all-important coffee maker. Coat racks and tall shelves with cubbyholes for our personal items divided the green room from the work area.

For the first couple of weeks, the two male offstage understudies were not called, so Patti C. and I had the understudy table all to ourselves. And we needed it. Our time in rehearsal was a constant battle with paper: new script pages, new music pages, diagrams of the set and Post-It notes. Stage management set up a big file box with a folder for each company member, and God help you if you didn’t check your folder throughout the day, because the creatives (composer Scott Frankel, lyricist Michael Korie and librettist Doug Wright) were always hard at work improving and tightening the show. I got in the habit of arriving early – sometimes as much as half an hour – to get my pages. Sometimes these changes were big ones, that encompassed multiple pages; more often they were tweaks – deleting a line here, adding another there, changing a lyric, changing it back – but I had to stay on top of each and every one. That meant pulling pages out of my binder, replacing them with the new pages, transferring any staging notes to the new pages (for the Rubinstein track I wrote on the pages in pencil; for the three ensemble tracks I used color-coded Post-Its) and highlighting the lines (again, color-coded) so I’d be ready when rehearsal actually began. After our meal break, and sometimes even after a ten-minute break, there would be still more new pages. I quickly learned that bringing lunch and eating it in the studio gave me extra time to incorporate and review the changes.

I also learned the disadvantages of our understudy table. For some reason it was a popular drop-point for anything anyone didn’t need at the moment: water bottles, discarded script pages, partially eaten food, lozenge wrappers, used Kleenexes. It was also not the best place to observe the show. Director Michael Greif used numbers at the lip of the stage to block the show (for example, an actor might be blocked to cross diagonally from 8 Left to 2 Right), but sitting at extreme “house right,” as we were, made it difficult to see those numbers. We could lug our big binders all the way over to the other side of the playing area, where the rest of the cast had a table, but there wasn’t much real estate available there and the view had the same problem, just in reverse. We couldn’t stand behind the people seated at the long row of tables because of the cubicle dividers. And when music director Larry Yurman got up to conduct a musical number, he usually stood just to right of center, so he, poor man, was always in our way. If we got too frustrated, we could usually consult someone in stage management or our dance captain to get the staging, but the only time to do that was during a break, and those poor people needed time to pee and get coffee just as much as anyone else.

The first couple of rehearsal weeks were devoted to getting the ensemble up to speed: reviewing their material retained from the Chicago production and teaching them their new music and movement. I followed along in my script as best I could, since it was all new to me. Occasionally I’d stand off to one side or behind the company as they worked on the choreography, trying to step through the movement myself, but I was usually in someone’s way and a distraction to those watching. Anyway, most of the time Patti Cohenour and I were standing in for Patti LuPone and Christine Ebersole. 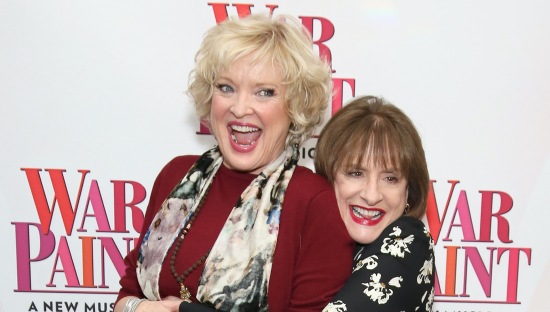 That was a weirdly nervous day in the room, Everyone seemed a little too loud, a little too bright. The two stars were greeted with applause and cheers. I was quickly introduced to them, and then everyone got down to work. Both ladies were cheerful and professional; they cracked jokes and smiled and finally the room seemed to settle down. Patti was a force of nature: one hundred percent committed and at full performance level from the minute she stepped into the playing area; Christine was more reserved, and I got the sense she was carefully calibrating how much energy was necessary in each scene. When they had an issue with the material their approaches were different as well: Patti attacked the problem with gusto and head-on, while Christine’s process was quiet and more circuitous. Either way, most of the time the ladies got what they wanted. If things got too tense during the process, the rest of the company was put on break until things were sorted out. This was especially the case when a new scene was being worked through. Those involved with the scene huddled together with the director, working through any issues, and everyone else made themselves scarce. (I’d been warned that input from the “peanut gallery” was unwelcome at these times.) At first I was asked to leave with everyone else, but since I was getting very good at making myself invisible when not actively involved, I was eventually allowed to stay at my table, eyes on my script and mouth firmly shut.

Just being in that room with those two women was like attending a master class every day – not just the way they handled themselves while rehearsing, but their comportment during the entire process. They knew when to break the tension with a joke and when to be serious; they knew when to withdraw to their private rooms and reserve their energy, and when to spend time engaging with the rest of the company. They knew when to compromise for the good of the show and when to stick to their guns for the sake of their own performances.  But oh…those rehearsals. Hearing Patti belt out one of her big numbers made my hair stand on end. And the first time I heard Christine sing “Pink” (Arden’s last solo in the show), I dissolved in helpless tears.

Midway through this part of the process our two male understudies were finally summoned to rehearsal. I already knew Tally Sessions, who understudied Doug Sills, but Tom Galantich, who was John Dossett’s cover, was new to me. We all got very chummy very fast – we had to, since the understudy table was now VERY crowded. Elbow to elbow we worked on our scripts, highlighting and noting, pulling pages out and putting pages in, mouthing lines in the scenes and humming along with the musical numbers. And just as I was starting to get comfortable – just as it was all starting to make sense – it was time to move out of the rehearsal space and into the theatre.

Next up: The Nederlander.