(Note: This is a holiday blog I wrote for my publisher, but liked it well enough that I wanted to repost it here, along with some photos and an epilogue.)

I am standing at my deck doors, peering through a light snowfall. Every one of my bird feeders is busy: goldfinches, nuthatches, downy woodpeckers, chickadees, cardinals and titmice jostle with the house sparrows – the guttersnipes of my back yard – for seed. I’m not watching them, though. I’m looking at the very back of the yard. On a rock beneath a tree sits a chunk of hot dog and half a boiled egg. Twenty yards away, beneath another tree, is another bit of meat and more egg. They are my offerings to the Christmas Foxes.

I spotted them the first week of December: one fox brilliant red, with a fine big brush of a tail and slanted amber eyes, the other a ragged wisp of a thing, its tail a rat-like whip, its eyes puppy-vulnerable in the ruin of its face. Mange, I thought. Poor thing, it’s going to suffer when the weather turns cold next week.

The pair had just had an encounter with a gray squirrel. The squirrel had escaped with its life but not its bushy tail, which the mangy fox was eating. The other fox was still crouched, staring at the squirrel as it fled up a nearby tree, and it was then that I noticed the bare patch on the fox’s right shoulder. Ah, it’s got the mange as well. Poor things. I had a little pang of sympathy for the squirrel, too, but not much: if house sparrows are the guttersnipes of my yard, then squirrels are the thugs, stealing from the birdfeeders, digging in the deck planters, raiding my tomato plants.

The two foxes slipped into the underbrush of my neighbor’s unkempt back yard and were lost to sight, and I went to my study to research mange in foxes. I discovered that sarcoptic mange is rampant in the fox population in my area, but it’s treatable with a relatively inexpensive and easily-purchased medication. However, I also discovered that if I were to call animal control to deal with the problem, the foxes would be euthanized rather than treated because they can be rabies carriers. When I contacted a local wildlife rehabber, I was told that under local law, trapping the foxes – even by a rehabber, even to take the animals to a vet –  is illegal. This Catch-22 means that the foxes go untreated. The rehabber, in rather veiled language, suggested I do a bit more research.

So I did. I learned where to buy the medicine, how to administer a dose in food, and how much and how often to dose the foxes. While I waited for the meds to be delivered, I began putting out a few bits of hot dog for the foxes, at the back of the yard where I’d first spotted them. I always put the food at the same place, at roughly the same time of day, so the foxes would get used to finding it there. Although I didn’t see them take the food, it was always gone within a couple of hours (and my omnivorous squirrels ignore the stuff, so I can’t blame them). Once I received the meds, I dosed some food and left it out. It disappeared as well, and I crossed my fingers that one or both foxes ate the treated bait. Occasionally I’d spot the foxes in the yard, and took to calling the sick one Wisp and the other one Patch.

Yesterday I walked past the deck doors just in time to see Patch kill a squirrel and sit down to eat it, right in the middle of the yard. Wisp was nowhere in sight. Patch devoured about half the squirrel, then carried it uphill into a vacant yard and settle down with it. Just then Wisp showed up, but to my dismay, rather than share the squirrel, Patch became aggressive, chased Wisp off and then carried the remains of the squirrel away. Sorry and sad, I put out a bit more food just in case Wisp was still in the area. It was untouched through the rest of the day, but in the morning it was gone.

But this is real life, not a story. Wild things play by their own rules. They don’t always share when they’re hungry, they don’t always take the medicine we provide, they don’t show gratitude for or even knowledge of our feeble efforts on their behalf. So I try not to judge them by storybook standards. I accept that this is the state of things, and yet I keep doing what I can to help. I buy the medicine and put the food out and stand in the window and do what humans do best, especially at this season of the year:

EPILOGUE: I finally saw Wisp eat some of the medicated food, and s/he has been back to the yard a few times. Patch has returned, too, and I’ve spotted at least two additional foxes, a light-furred specimen with a lovely coat (christened Shine) and one with a broken or badly dislocated hind leg (called Hop). My husband gave me an infrared trail camera for Christmas, and I’m hoping to have more photos and even videos to share in the future. 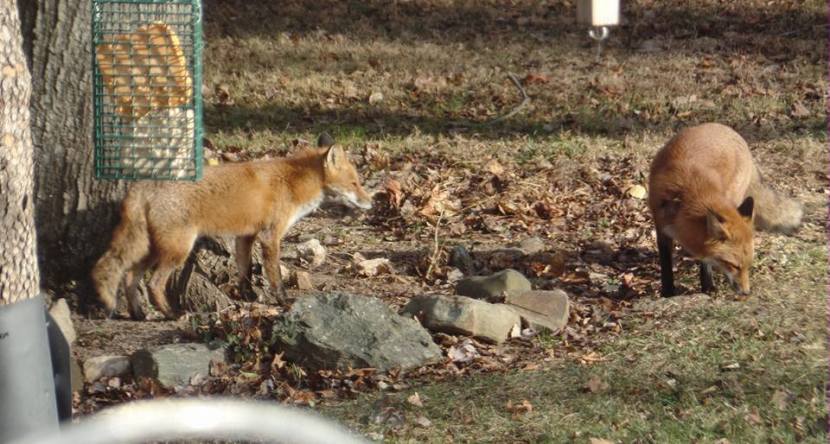