In the world of gardening, you can definitely have too much of a good thing.  A few years back, it was a plethora of green beans.  A year or two further in the past and it was abundance of tomatoes.  But here’s the thing about tomatoes and beans:  in addition to being delicious fresh, they can be canned, blanched and frozen, pickled, dehydrated and otherwise stored for later use in a number of interesting and creative ways.

That’s not the case with cucumbers.

Stupid fairy.  Stupid me.  I listened.  I planted three cuke seedlings.  And here’s the even dumber thing:  I planted three SLICING cucumber varieties.  I didn’t even have the sense to plant some Kirbys for pickling.  Nope, I planted three Straight Eights.  And then, when one of them died back early on, I didn’t just shrug and say, “oh, well – that’s gardening” or even “wow, now I can plant a pickling variety.”  I bought another slicing variety and planted it in the vacant spot.  Can’t even remember now what kind, but it took hold like a champ.

I went off to the beach for a week in early July, leaving my garden to fend for itself.  Most of the plants were fine; just kind of doing their thing at the usual pace, but the cuke vines were growing vigorously and were full of little babies when I left.  When I came back, I had more than a dozen full-sized cukes ready to pick.  So I picked ’em.  My husband and I dined on beautiful fresh sliced cukes in lieu of tossed salad.  I made tzatziki.  I made cukes and onions with a vinegar dressing.  Everything was delicious.  But the cucumber plants were still producing, at the rate of a half-dozen every two days.

I started researching new recipes.  I wondered if cukes could be cooked, and discovered that they can be sauteed.  I enjoyed sauteed cucumbers for breakfast several times.  A friend told me they can be stir-fried with chicken.  John and I tried that one night and decided it wasn’t half bad – on the bland side, but comforting.

The cucumbers kept on coming.   I ate a lot of cucumber sandwiches. I drank gallons of cucumber water.  I made a jar of hot-sweet refrigerator pickles.  I made two jars of freezer pickles.  The tomatoes were beginning to bear fruit, but in spite of my barrier of fencing and deer netting, my neighborhood grey squirrels were making off with the the tomatoes before they even turned green.  They strolled right past the cukes without giving them so much as a sniff.  The cukes kept on coming.  I gave away several dozen.  My neighbors started to duck inside if they saw me headed their way with cukes in my hands.

Then I had a brain wave.  Since so many vegetables can be dried, why not cucumbers?  I got out my trusty dehydrator and got to work, peeling, seeding and slicing cukes.  I sliced some thick, some thin, some into strips, some into half-moons.  I used up all the cukes I had on hand, and actually went out and picked more. Some I salted, some I sprinkled with herbs, some I dipped in lime juice or vinegar before starting the dehydration process.

And you know – they weren’t half bad.  It took approximately five hours at 135 degrees to dry them.  The flavor was kind of bland, and while they were fairly crisp when they first came out of the dehydrator, the crispness faded after they’d been stored in plastic bags and the resulting chewiness wasn’t terribly appetizing.  I chalked up the dehydrating as a failure, but at least I’d used up all the cukes in the house.

For a while.  The vines kept producing.  I made pickle relish.  I made cucumber and apple chutney.  I made cucumber juice:  coarsely chop the cukes – peel, seeds and all – and whirl them in a blender until they’re pureed.  Put a mesh colander over a bowl, line with cheesecloth, pour in the puree and let it drain – you can put a plate on top and weight that down to speed the process.  After a couple of hours, gather up the cheesecloth into a bag and press and wring it until all the liquid is squeezed into the bowl.  Discard the solids and use the juice to flavor water, seltzer, cocktails, etc.  The juice is quite pretty – a light green – and freezes just dandy.

And still the cukes kept coming.  I made more tzatziki.  I ate more cucumber sandwiches.  I drank cucumber water and seltzer flavored with cuke and lime juice until I couldn’t stand it any more.  My cantaloupes started producing and damned if the squirrels didn’t go after those, too, but they continued to turn their little gray noses up at the cukes, even when I cut up a few and tossed them into the yard, hoping to entice them away from the tomatoes and ‘loupes.  No good.  I made a cuke, cantaloupe and lemon smoothie.  It was only okay.  In desperation I threw three whole cukes right into the freezer as an experiment.  (I’ll check them out in the depths of winter and see what kinds of results I get.)

And now, as we move into the final weeks of August, the cuke vines finally seem to be slowing down.  I only got a half-dozen cukes in the past week, and some of them don’t look so hot.  The plants themselves are turning kind of yellow-y and limp.  I feel kind of limp myself – limp with gratitude.

Will I plant cucumbers next year?  Probably.  I do love a crisp, fresh cucumber.  And some of the recipes I tried this year were pretty good.  But I think I’ll just put in one vine next year – a Kirby or some other pickling variety.  For now, the thought of eating one more cucumber ANYTHING makes me shudder. 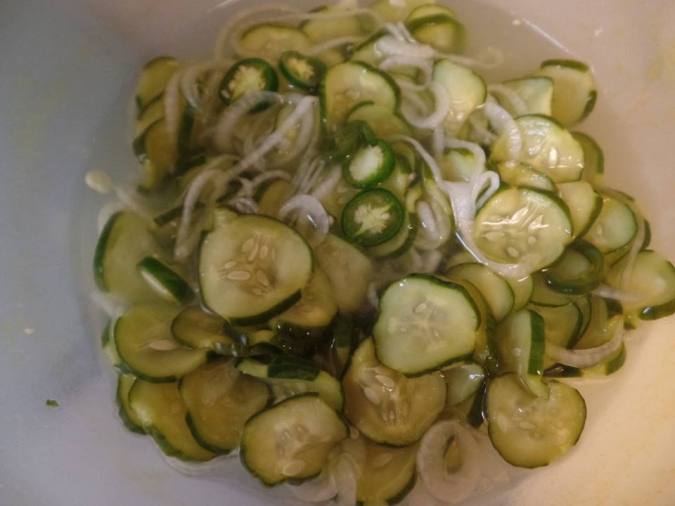