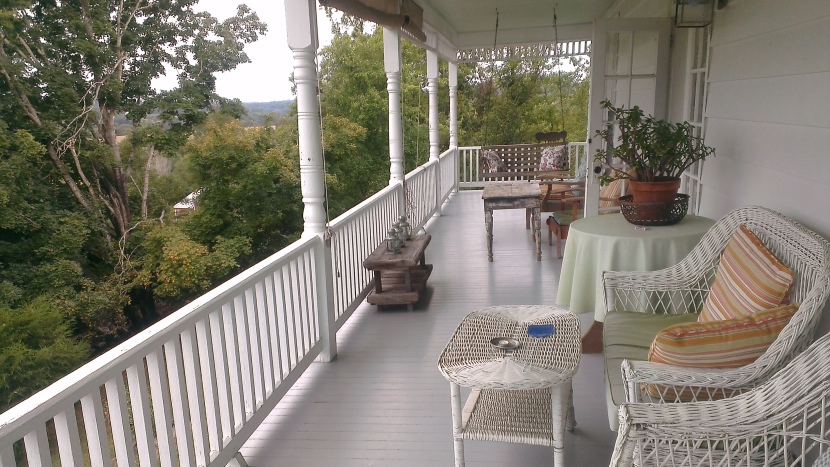 The second floor porch of The Porches

It’s one of those things we actors folks both dream about and dread:  unrelieved, overlapping gigs.  Show after show, gig after gig, all tumbling together on the calendar like a bunch of happy puppies, difficult to manage, nearly impossible to organize, hard not to love.  I’ve been going nonstop since October a year past, industrial upon workshop upon one-nighter upon show uponshowuponshow.  Don’t think for a minute I’m not grateful; I am.  Back to back gigs in my line of work are something to be celebrated.  It’s like having a “real” job for a change:  knowing exactly what you’ll be doing a week from today, the ability to plan ahead, and most important, the constant paychecks.

But after nearly a year of it, I was desperate for a break.  I only get one day off a week, and that’s Monday, and it’s usually filled with mundane things like laundry, grocery shopping, housework and making dinner for my long-suffering husband.  I had a month-long break in June, but I spent it with my mother in Tennessee, getting her house in order after she’d been in rehab following a fall and a fractured hip.  It was a break from show biz, yes, but it was not a Break in the normal sense of the word and in fact, was a lot more stressful than I realized.  I looked at my calendar and saw that I would have three weeks off between SUNDAY IN THE PARK WITH GEORGE at Signature Theatre and THE LITTLE MERMAID at Olney Theatre.  And I said to myself, “by gum, Self, you are going to take a REAL BREAK.”

Unfortunately John had a project due at work, so we couldn’t take a break together, but with his blessing I decided to strike off on my own.  The first thing I wanted was to have some uninterrupted writing time.  Through research and the recommendation of playwright Bob Bartlett, I settled on a three-day stay at The Porches in Norwood, Virginia.  As soon as SUNDAY closed, I packed my bags and my travel  computer and set off for Central Virginia. 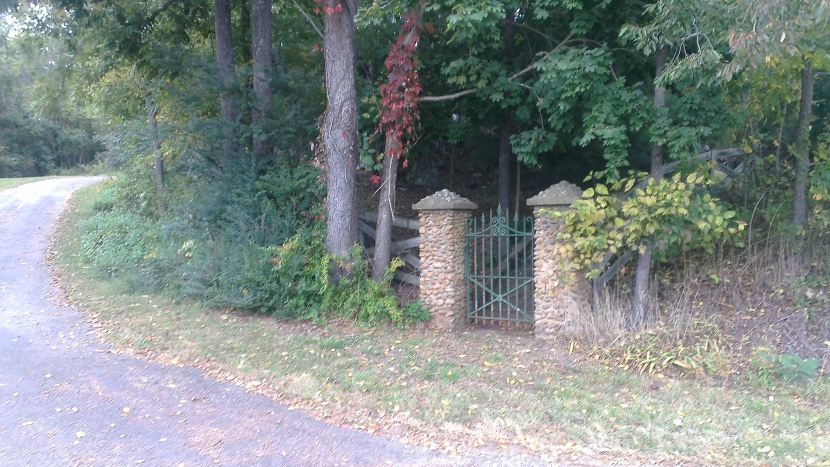 Front Gate of The Porches

Trudy Hale, owner and hostess of The Porches, sent along a sheet of directions and advised that I use them instead of my in-vehicle GPS.  There’s a reason for this:  Norwood, Virginia is out in the boondocks, and when I was about fifteen miles out from my destination my GPS simply stopped working.  Fortunately Trudy’s directions are quite clear, and I pulled into the gravel driveway of The Porches around 4:30 PM on Tuesday.

Trudy met me at the door, along with Jenny, one of the other writers in residence.  There were two other writers at The Porches when I arrived, and all three of them left the following day.  I chatted at length with Jenny, exchanged only a few words with Anne, and never even saw Henry.  Privacy is tantamount at The Porches; there are rules about keeping quiet during the day so you don’t disturb other writers as they woo their Muse. 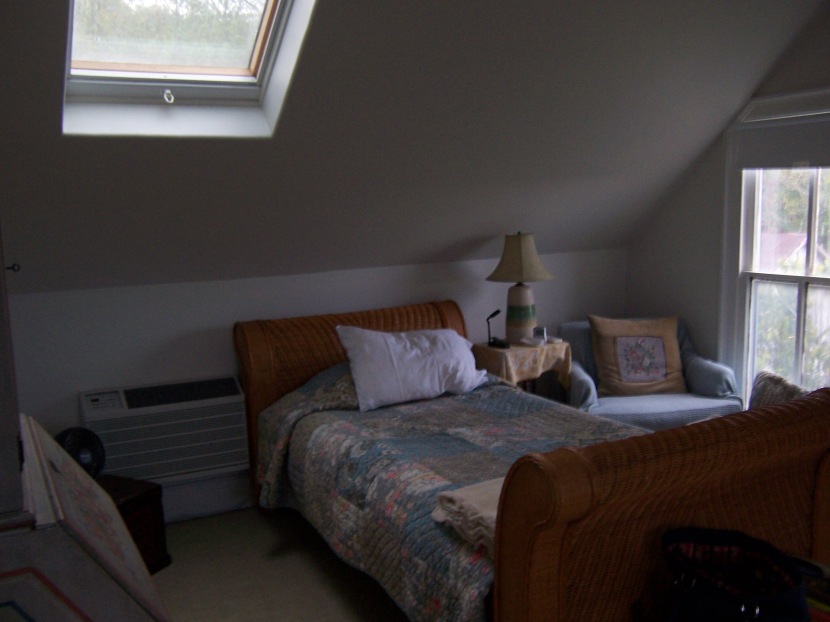 My little bed in the Jade Room.

I unpacked the car, stowing my foodstuff in the Writers’ Refectory (a large first-floor kitchen and dining room) and dragging my other things up to my assigned quarters:  The Jade Room, on the top floor of house.  Initially I was a little dismayed at being waaaaay up there (in addition, the Jade Room is the only room equipped with a single bed instead of a double), but after I’d gotten moved in I had to admit it was an awfully nice place.  It was a light, airy room with a skylight, plenty of windows, a view of the treetops and loads and loads of quiet.  It also had a generous workspace for my computer and attendant Writing Junk, a power strip for All The Things That Must Be Plugged In, a ceiling fan and good lamps for writing at night

Not that I did much writing that first night.  I was too busy getting oriented and arranged, and discovering that there was absolutely no cell reception anywhere on the property (“AT&T and Verizon don’t get along up here,” was Trudy’s explanation).  I had to email John to let him know I’d arrived, and we kept communicating via email, and you know what? it wasn’t so bad.  I wrote him a little letter in the morning and sometimes one at night, and it was actually sort of sweet.

My sleep that night was only so-so, as I expected.  I never sleep well the first night away from home, and the final week of SUNDAY’s run I’d had some kind of bad reaction to a bug bite that made me break out in hives – some of which might have been stress-oriented.  I’d been to the doctor and gotten a steroid shot to bring the hives under control, but I still had some major itching going on.  All the same, I got up the following morning ready to write.  Trudy was already gone – driving Henry to the airport in DC (!) and Jenny and Anne departed not long after, so I had the house to myself.  After breakfast, I got to work.  I took a break for lunch and kept on going until about 2 PM, when I realized my eyes were crossing and I needed a break.  I stuck my phone in my pocket (although I couldn’t make any calls, I could take photos) and struck off to see what the neighborhood looked like. 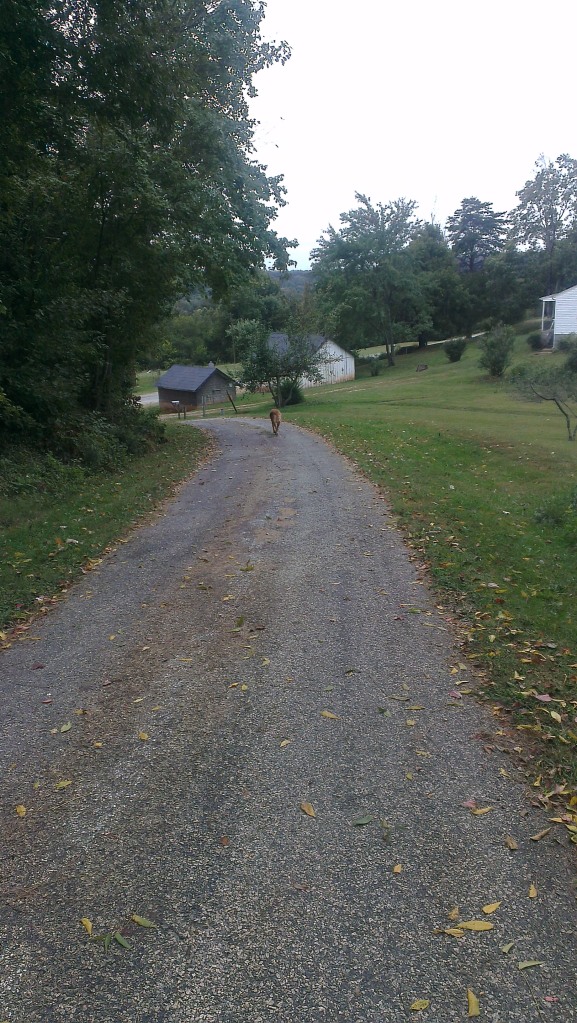 Heading down Norwood Road, with Maizie in the lead.

Maizie, Trudy’s dog, was waiting just outside the gate and happily accompanied me on my walk.  There was no one else around; not a soul.  The only other person I saw on my 45-minute walk was a school bus driver, who waved to me as she passed the first time and waved again on her return trip (I wondered what poor kid lived way up here in the boonies).  I crossed a little stream (I found out later it was not a stream at all, but the Tye River, a tributary of the James River which is not far away from The Porches), looked at a cow with her calf out in a field, saw a lot of old ruined houses and barns (very picturesque; made me wish I was a painter), and generally just enjoyed the fresh air.  It was overcast and smelled like rain, and by the time I returned to The Porches (Maizie having long ago abandoned me for a neighbor’s yard) it was beginning to drizzle.  I met Trudy out in the garden with a trowel and trug; she had only just gotten back from her trip to DC.  I thought it was awfully nice of her to drive Henry all that way, but she shrugged and said she’d known him for thirty years.  We stood in front of the house chatting for nearly an hour; she told me that she owns the little church just across Norwood Road from The Porches, and has hopes of turning it into an art studio/gallery at some point.  She also told me a way to get down to the River Tye, and the best walks in the neighborhood.  It started to rain in earnest then, and Trudy went into her side of the house, and I went upstairs to the Jade Room and got back to work.  It rained the rest of the day and into the night, but the drumming of it on the tin roof was oddly comforting. 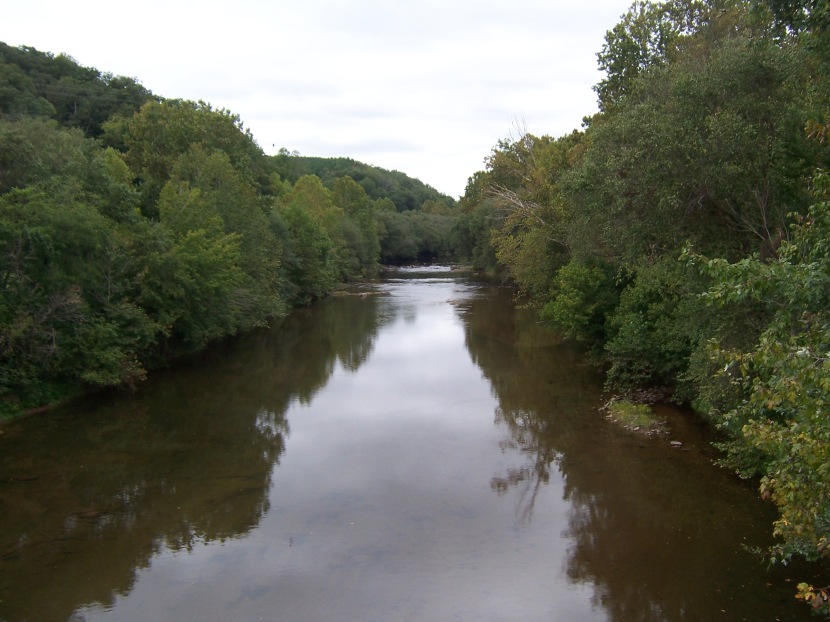 A view of the Tye River

I wrote nearly 2000 words my first full day at The Porches, which probably doesn’t sound like much but it’s a lot more than I’ve been averaging of late.  I generally peck out 500 or so words a day, but my excuse is that I edit and polish as I go – a system some writers scoff at, preferring to burp up words without stopping, but I’ve written two previous books this way and it’s what works for me.  In addition to writing, I also read and did some yoga and never once turned on a TV (there’s one downstairs for them as wants it).  Day Two was much the same, except even quieter – I had the whole house to myself.  I followed much the same pattern:  wrote all morning, took a break for lunch, wrote until midafternoon, went for a walk (this time sans Maizie, who couldn’t be bothered).  I didn’t get as much written the second day:  only about 1000 words, and I wasn’t entirely happy with it, but this is a first draft, after all, and I’ll fix it in rewrites.

So after my two full days and two partial days at The Porches, I can give it my heartiest recommendation.  It’s quiet, it’s comfortable and it’s been lovingly laid out for working writers.  The Refectory has plenty of refrigerator and storage space; the Writers’ Lounge looked comfy but I never used it – too busy writing.  I brought my own books to The Porches but it was like bringing sand to the beach – every room in the house, with the exception of the bathrooms, had books in it.  I had a peek into the other rooms and each of them is a veritable Writer’s Haven, with good light, a comfortable work space, great views and cozy armchairs and sofas for lounging in.  The price is reasonable, the location gorgeous, and Trudy was funny, kind and welcoming. 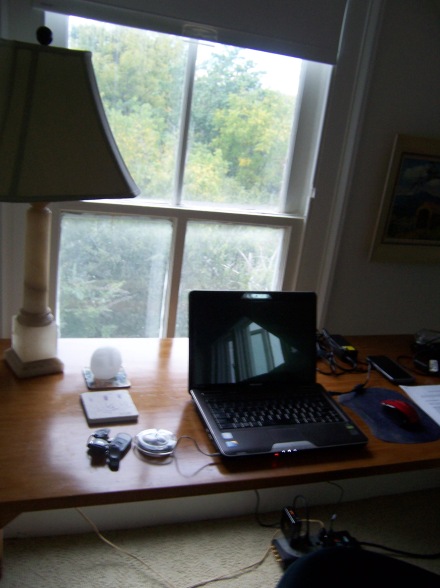 Workspace with a treetop view

I’m off on the next leg of my three-legged trip tomorrow:  heading to Raleigh to visit my sister Margaret, by way of Appomattox Court House and environs.  I’m looking forward to a weekend featuring a beer fest and a hockey game.  It’s the antithesis of The Porches’ serene atmosphere, but after so much solitude, I’m about ready to be join the human race again.