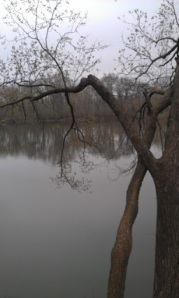 I mentioned in yesterday’s blog that I had been doing some creative writing – wasn’t that coy of me? Actually, I’ve written most of my life, but I’ve always kept the creative stuff to myself. It’s an anomaly – as an actress, most of my life is an open book, but the idea of letting anyone read what I’ve written is oddly unsettling. Nah, let me be more honest than that: it’s terrifying.

Years and years ago, I wrote a book. It was a BIG book. I wrote it mostly alone – only showed bits and pieces to my family, didn’t belong to any writers’ groups where I could read it aloud, never took it to an editor – and once it was done, I packaged it up and sent it to the publishing house that specialized in the book’s genre. The publisher kept it for a year and finally sent it back to me, with a nice note pointing out the flaws and expressing an interest in seeing it again in a revised form. I was over the moon. I sat down and whacked it out again – this was back in the day of typewriters and white-out, so you can imagine the sheer volume of paper I was going through – and when I thought I’d done what the publisher wanted, I sent it out again. More promptly this time, the publisher shot it back to me, with a less encouraging note: I hadn’t really incorporated what they’d asked for, and it was still TOO LONG, and good luck placing it with another publisher.

I wasn’t heartbroken, but I was stymied. I didn’t know how to make it shorter and I didn’t really understand why it didn’t work for them. I boxed the up manuscript up and put it away, along with all the copious notes and research that accompanied it. And I got on with my life.

But I never really put the the story away. I never really stopped writing it. In quiet moments I’d find myself wondering what would happen if Character 1 did this? What if Character 2 went there? What if Character 3 disappeared entirely? Sometimes I’d actually write little dribbles and drabbles – God alone knows what became of them. But then personal computers came along, and with them a new kind of freedom: freedom from typewriter ribbons and white-out and the reams and reams of paper. One could edit right there on the screen. One could shift paragraphs or even whole chapters around with a click of a key. One could actually write stuff and keep it, with no file folders or ring binders or the incrimating evidence of crumpled wads of paper. Oh, and the Internet! When the Internet came along, I thought I’d died and gone to heaven. Now if I needed to know something (such as the Icelandic word for fish – don ‘t ask), I could look it up right then and there. I continued to write my dribbles and drabbles, but I felt what I was writing had some honest-to-goodness veracity at last.

And I’d gotten older, a LOT older, and maybe I’d gotten some veracity at last, too, or at least a thicker hide. (You don’t spend twenty-something years in show business without getting used to the idea that no matter what you do, someone is always going to think you suck.) So during a recent between-shows lull, I got the manuscript out and forced myself to read it through. A lot of it made me wince – it was so stately and earnest – but the germ of a good story was still there. So I started to write again. I’ve spent almost a year rewriting the book.

I was still writing in a vacuum of my own creation – I mentioned the book to some trusted friends, but didn’t let them read any of it. I joined a couple of online writers’ groups and read their posts assiduously, but contributed nothing of my own. God bless my husband; he is as private a person as I am (mostly) public, and he left me alone while I wrote, not asking for explanations or evidence or even results.

But one can’t write in a vacuum forever – I mean, the cycle isn’t complete until the writer finds a reader, is it? The thought of having someone read my book still made me all sweaty and anxious, and I knew I had to get over it. I’d already floated one scene of a play I’d written past a group of playwrights – a play I wasn’t deeply invested in, a play that could be the sacrificial lamb on the altar of my fear – and wonder of wonders, while the playwrights hadn’t been exactly thrilled with it, they hadn’t been cruel, either. And I had survived.

So I did more reading, more research, but this time on the nuts and bolts of publishing. And I discovered things had changed, and changed drastically, since the day some thirty years ago that I’d flung my manuscript over the transom into a publisher’s lap. One of the books I read recommended attending a writers’ conference, so I researched those. I narrowed my options down and chose one.

And that conference will be the topic of my next post. Stay tuned.