Instead of doing something useful like washing the dishes or scrubbing the tub, I thought I’d write about my little studio sublet in New York City.

Let’s start with the front door. That peculiar coffin-shaped thing on the right is the peephole. It’s the oddest peephole I’ve ever seen. You turn the knob on the right and that opens the little white window. You look through that to see the hallway outside. I have no idea why the peephole cover is so large, or why it’s shaped like a coffin, but it’s rather charming, particularly as the person I’m subletting from has painted the door with blackboard paint. This makes it a handy-dandy place to write messages to yourself (such as “don’t forget your sunglasses” or “buy spinach,” but thus far I haven’t availed myself of this convenience.

Here is the whole door, in all its blackboard-painted glory. The rectangular thing at the top is a funny postcard John sent me from a recent trip to Chicago. It makes me smile, which is why it’s where it is. The round things on either side of the peephole cover are metal containers with magnetized backs. The one on the right is full of colored chalk. The one on the left is empty. I can’t think what to put in it so I’m taking suggestions.

As if having the whole front door as a blackboard wasn’t enough, there is also a three foot-wide, floor-to-ceiling section of one wall which has also been painted with blackboard paint. I am not providing a photo of this, as it has the code for the apartment’s internet on it as well as some personal notes from my loving husband, none of which fall into the need-to-know category for those of you who read this blog. The wall blackboard is surrounded with a scalloped border in a cheery shade of orange. 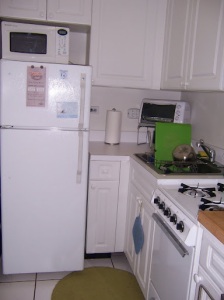 If you walk in my front door and turn left, you will find yourself in my teeny-tiny kitchen. Don’t get me wrong; I am grateful that it’s in a separate room (so many studios have the kitchen in the living room, or even the bedroom – when I was apartment hunting, I saw one place where you could literally roll out of bed and stand in front of the kitchen sink). However, it is teeny and has very little counter space, although it has plenty of pots and pans and plastic containers and a full-size fridge and a gas range and a microwave. In this photo you can see the dirty dishes from dinner which I haven’t washed because I’m writing this blog. For those that need to know, I had sauteed spinach with garlic and a baked sweet potato, along with a glass of wine, followed by a slice of week-old cake that still tasted pretty good. Like I need cake. Seriously, we keep having cake in the afternoon at rehearsal – lots of Virgos in our cast. However, John bought the cake for us last week when he moved me in, and I feel somehow obligated to finish it up. For week-old cake, it’s holding up pretty well. 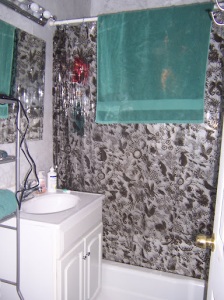 Next is the bathroom. If you recoiled in horror from the teeny-tiny kitchen, staggered down the hall and made the first right, you would find yourself in a wee anteroom where my closet lives, with the door to the bathroom on the right. The bathroom is also on the wee side, but it has, at least, a full bath with tub, a sink and a commode. I have been provided with some linens by my landlady, and I must point out that the marks on the teal-colored towel draped across the shower rod appear to be from bleach. Most of the provided towels have these bleach marks. However, they still do their job fine, and anyway, they are not the outstanding feature of this bathroom. The outstanding feature is the shower curtain, which fascinates me. It is covered in silhouettes of animals – hedgehogs, deer, rabbits (LOTS of rabbits), birds and insects – in various styles, none of which match. There’s a cluster that looks as if it was taken from an vintage edition of “The Brementown Musicians;” there’s a fawn that looks a bit like Bambi; there are some birds that look like Japanese woodcuts, and then there’s the gem of the collection, The Rabbit With An Attitude:

I do not know why this rabbit is so annoyed, and I can’t tell whether it’s pruning flowers or eating grapes. Whatever it’s doing, it’s not liking it. My morning shower is not complete without a few moments’ contemplation of The Rabbit With An Attitude, usually while I’m giving my conditioner a few minutes to sink into my hair. I also like the tattoos on the Rabbit’s body. What with the tats and the ‘tude, this is clearly a badass Rabbit and just the sort of thing one needs to see before one starts one’s day in the Big Apple.

Once you leave the bathroom (mind the step; for some reason the bathroom floor is about two inches higher than that of the rest of the apartment, a detail I sometimes forget when I am stumbling in for my first bleary-eyed visit of the day), you will find yourself in the main part of the apartment. This is the living area:

As you can see, the main part of the studio has been rather cleverly divided using a shelf unit, tension rods and curtains, so that the sleeping area at the rear of the apartment can be closed off for privacy. The blue sofa is quite comfy although I could live without the Pepto-Bismol pink throw pillows. The throw over the right side of the sofa is one I brought from home, which coincidentally has rabbits on it, although none have an attitude. The wall with the blackboard paint on it is to the right, out of sight. Facing the sofa but out of the photo as well is another large shelving unit, which is the home of a crooked lamp and a teeny-tiny television. When the mood strikes me, I can watch many many cable channels on this tiny TV which is why I usually fiddle on the computer or read when I’m home.

If you parted the curtains to the right of the sofa, you would find yourself in the bedroom portion of the studio. It’s a full bed, which is fine for just me but a bit too snuggy when John is visiting. On the bed is an extremely heavy down comforter. It looks nice, albeit somewhat lumpy, but as of now I’m not sleeping under it as it’s still too warm outside (I don’t know yet how warm this apartment will be in the winter; there is no thermostat in the apartment and I’m told that the building management determines when to turn on the heat. Right now the a/c is running, but I expect that to change in the near future). When I go to bed I roll the comforter up and put it on the floor, along with the pink throw pillow and the two striped pillows. I brought my own pillow from home which lives behind the striped pillows when the bed is made. I have been sleeping under a lightweight blanket, which is nice and soft but clearly made for a much larger bed – in fact, all the linens appear to be for a queen-sized bed at the very least. This makes for wrinkly sleeping insofar as the fitted sheet is concerned. Sitting on the bed is Road Pig, who has traveled with me to all my out-of-town gigs. He doesn’t sleep in the bed at night, though (he hogs the bed yukyukyuk). If you look at the previous photo, you will see a large yellow object in the shelving unit; that is Dug the Dog (from the movie Up), which John gave to me to keep me company in New York. Road Pig sits next to Dug at night. Dug talks to me. No, really, he does – he has a voice box and if you press his left paw he says things from the movie like “I have just met you, and I LOOOOVE you,” which is nice to hear first thing in the morning, if only from a stuffed animal. (If your eyes are really good, in the cubicle just above Dug you can see a small plastic Po the Panda from Kung Fu Panda, which was given to me by my friend Matt Anderson. Po also talks, although his vocabulary is not as expansive as Dug’s, being limited to kung fu screams and the occasional “skiddoosh.” He will move to my dressing room at the theatre eventually.)

This is looking from the bedroom area back toward the front of the apartment. From here you can see the little dining table and beyond it, yet another shelving unit which has a desktop. This is where I sit when I’m at the computer. Since I don’t have a closet large enough to house my shoes, they are in a line in the bedroom area – if you look at the bottom of the photo on the left-hand side, you can see a few representative pairs. The blackboard which has information on it which is none of your business is on the other side of the curtain on the left. I took this photo with my back against the windows at the rear of the apartment, so this will give you an idea of how small this studio really is.

And here is the living area as seen from the sleeping area. The dining table and desk are to the left. You can see just how teeny the TV really is, and you can also see the somewhat eccentric but cheery random teal edging in the corner. If you look back at the Dug photo, you can see more eccentric edging along the top of the window, only this time in a rather odd shade of green. But the dividing curtains pull it all together. Kind of.

So that’s pretty much where I’m living in New York. I make fun of it, but it’s actually quite pleasant and usually fairly quiet. I’m told that the walls of the apartments are concrete, which may account for the quiet and for the occasional cell phone signal difficulty I have in the apartment. I don’t get a great deal of noise from the street below, except on Saturdays when everybody seems to go a little crazy. Since my apartment overlooks the Midtown North Precinct, this may be why. Last Saturday was my first night in the apartment; now, a week later, I’m interested to see whether this is going to be a trend. There have been a few whoops and hollers from the street below and some loud car stereos, but it’s not been too bad. Which sort of goes for the whole experience thus far.