John and I drove up to New York on Saturday morning with a couple of suitcase and mixed feelings. While I am tremendously excited about making my Broadway debut, it’s also extremely difficult for an old bird like me to make a life change. Moving from our quiet little house in Virginia to a tiny apartment on a noisy street in the busiest city in the U.S. is quite a jolt. I shed a few tears as we drove away – I’ll miss the town Halloween parade and Christmas walk; I’ll miss cooking elaborate meals in my kitchen and decorating my home for the holidays, and I’ll miss all my friends who’ve been so wonderfully supportive of me through this process. But mostly I’ll miss John, who will be holding down the fort in Virginia while I’m away.

Our drive up to New York was uneventful and the weather was nothing short of spectacular. Our only slowdown was getting through the Lincoln Tunnel (no surprise there) and then we basically shot up 8th Avenue, parked the car at a nearby garage and humped the suitcases half a block to the apartment building. The doorman was very nice and welcoming, the apartment had been nicely tidied for our arrival, and once John got over how small the place is, he allowed as how I’d done pretty well finding a place. 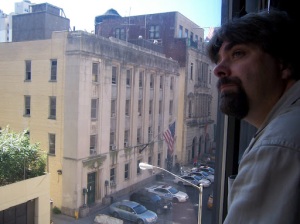 Once I got stuff unpacked (and cried over encouraging cards John had tucked into my suitcases), we walked the few blocks to the Neil Simon on 52nd Street so I could show John the marquee. He had me wear his The Big Lebowski “Achiever” shirt so he could post the photo at the Lebowski Fest website, but both of us were a little sorry I’d worn it later since it clearly typed us as tourists when we walked uptown to Columbus Circle and Central Park. We finally gave in and did the tourist thing: hired a pedal-cab to give us a tour.

It was actually a lot of fun. Our guide had a thick accent so it made it difficult to understand him much of the time, but he pedaled with a will and was very pleasant. We saw all the major sights – or at least, those that are on the southern section: the Sheep Meadow, The Boat House, The Lake, The Pond, Tavern on the Green and so forth. We got of the cab to walk through Strawberry Fields and see the “Imagine” mosaic, then rejoined our cabbie to finish up the ride. He very kindly took a photo for us before we parted company.

We headed back to the apartment to rest for a bit, stopping off to pick up a few groceries (I’ll do a bigger shop later). John caught a quick nap while I continued putting things away and getting settled in and making lists of what I would need to buy to make things a little more homelike (I need a shower organizer and a soap dish and a paper towel holder, for starters). Then we went across the street to a local pub for dinner, walked around a little more, then returned to the apartment, shared a celebratory bottle of champagne and called it a night.

We were both exhausted but neither of us got a very good night’s sleep – my apartment overlooks the NYPD’s Midtown North precinct so there was a good bit of noise all through the night. In addition, we’re accustomed to sleeping in a king bed and sprawling all over, and the bed in the apartment is only a double. It’ll be fine for just me, but kind of tight for the two of us. In the morning we walked over to 9th Avenue for breakfast, then went down to find the Ragtime rehearsal space on 43rd Street. Eighth Avenue was closed for a street fair, so we walked through that most of the way down. Then we cut over to Times Square so John could see what that was like, then walked through the street fair some more, and ended up back at the apartment, watching an old movie like a couple of zombies.

Around 3:30 we walked over to the garage to claim the car so John could head home. Tears were shed but we bravely went our separate ways. I headed back to the apartment which was just as well, as John called needing me to look at directions for getting to the Lincoln Tunnel (turns out the route Yahoo! Maps gave us is closed on the weekend). He called again once he was on the Jersey Turnpike, and I expect as I type this that he’s home in Virginia, or very nearly so. 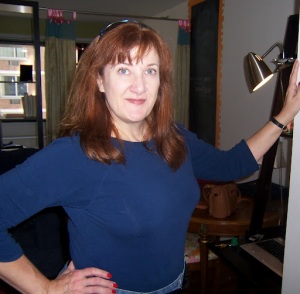 So here I am, ensconced in my own little piece of New York, grateful for a loving husband and an opportunity some people can only dream about. I’m still a little shell-shocked and disoriented, but I’m sure once I start work on Tuesday, things will settle into a routine and I’ll start to feel like less of a stranger here. I’ll keep you posted.