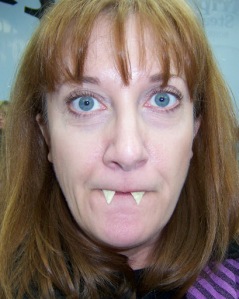 I love Halloween. The costumes, the candy, the scary decorations – I love it all. This year our Halloween seemed exceptionally lengthy, starting with the annual Vienna Halloween parade on Thursday the 30th. The event has a certain home-grown, small-town charm to it, as people line Maple Avenue (Vienna’s main drag) to watch the passing show. The street is blocked off to thru traffic for the duration of the parade, which results in a charming backup of traffic heading from Tyson’s Corners to Vienna (Maple Avenue also happens to be part of Route 123).

In past years John and I have parked on a side street and walked down to Maple. This year we decided to drive over to the Taco Bell on Maple, park and have dinner, and watch the parade from there. It was a good plan. We noshed on tacos and nachos and amused ourselves watching people in costumes go in and out (the parade’s staging area was only a block or two away). Shortly before 7 PM we finished our Fine Dining Experience, refilled our sodas, strolled out to the curb and found a good spot to watch. 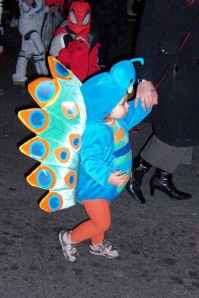 Among the first marchers in the parade were the Kids in Costume. Although there’s a lot to love about the parade, the reason the parade was created in the first place was so Vienna’s kids could show off their costumes. It’s my favorite part of the parade. We didn’t see a whole lot of super-creative outfits this year (well, there was a kid in the Taco Bell dressed as a Whoopie Cushion, which was pretty darned original) and there seemed to be a plethora of princesses and Star Wars characters this year. Last year there were a lot of witches, but clearly witches are So Last Year, as I saw very few marching down Maple. This little cutie in a peacock costume was a favorite. 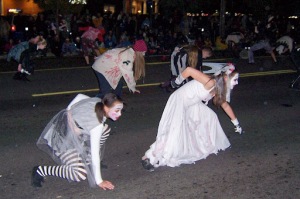 The kids marched past (I’m sure they put them early in the parade so they can get to the end and backtrack to watch the rest of the fun) and then we got the usual quota of politicians in cars and on foot (McCain’s people were vastly outnumbered by the Obama gang, but most of the Obama crowd looked a little too young to vote). We had bands (brass and bagpipe) and dancers (pictured is a local troupe getting down to Michael Jackson’s “Thriller”) and every form of transport known to man.

We had one wheelers: 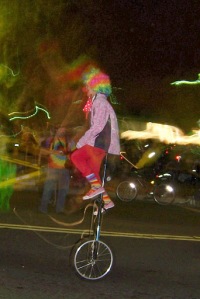 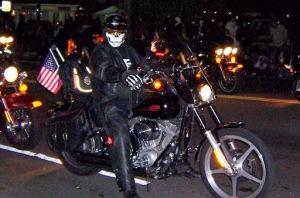 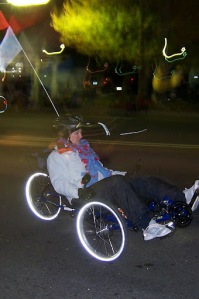 We had four-legged transport – size Large: 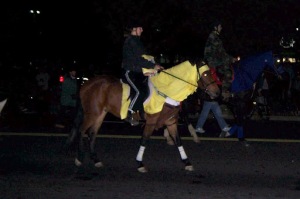 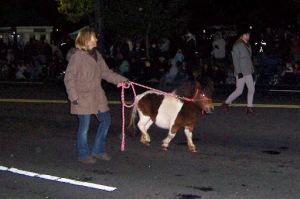 And some in between: 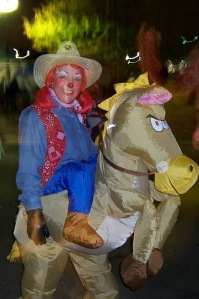 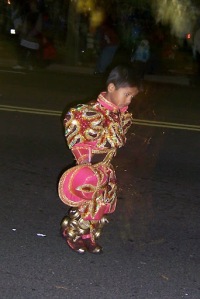 There were a lot (and I do mean a LOT) of South American dance groups, from various countries and in varying numbers and costumes but all doing the same basic dance (the girls and women switch their hips back and forth and the boys and men jump and stamp). This little guy was doing his best, but was clearly getting tired.

The local branch library had a parade of decorated book carts. There were two vintage tractors, chugging and puffing down the street. There were Kiwanis and Shriners, the latter wowing the crowd with synchronized routines in their signature little race cars. One happy boy near me shrieked, “AWESOME! This is the best part of the WHOLE PARADE!” There were more politicians, including all the members of Vienna’s Town Council. There were lots of dogs, many of them in costume (although the group of Great Danes from last year’s parade were sadly absent). The parade finished up with an array of fire trucks and ambulances of every age and description, brought in from all the neighboring jurisdictions. 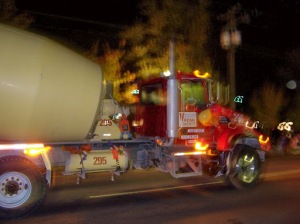 The Town of Vienna Halloween parade just isn’t complete without a cement mixer.