Those of you who are regular readers of this blog may remember this time last year, when I was a hopeful first-time entrant into the Washington Post’s first Peep Diorama contest. My 2007 entry was George Peepington Crossing the Delaware, and I labored long and hard on it. I didn’t win – didn’t even make the semi-finals – but I vowed that I would make another attempt when the contest rolled around this year.

Well, roll around it did, and I made haste to assemble the diorama I’d had in mind since before Christmas (John actually came up with the idea for it). Because I thought it would be amusing to have a little visual fun with the yellow Chick Peeps and the pink Bunny Peeps, my diorama design for 2008 was the famous “Rabbit Suit” scene from the beloved holiday film, A Christmas Story. 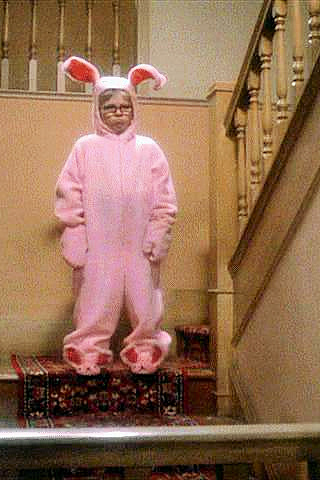 Since I knew I would need a semi-to
-scale Christmas tree for the diorama, I had already snapped one up during the post- Christmas sales (the one I bought actually lights up, a nice but unnecessary fillip). I stowed the little tree away for safekeeping, and waited in breathless anticipation for early spring and the arrival of Peeps in the local shops. I bought a DVD copy of A Christmas Story and watched the pertinent scene several times, making note of the scene’s layout, characters, set dressing and costumes. I also checked the Post website periodically for the announcement of the contest.

Naturally, said announcement was printed on a weekend that I happened to be out of town. When I finally discovered that the diorama contest was in full swing and I was a week and a half behind, I frantically began my search for Peeps. I needed four yellow Chick Peeps and one pink Bunny Peep for my design, but for the first several days of my search I could only find yellow Bunny Peeps and green and purple Chick Peeps (green and PURPLE???). Where were the classic yellow Peeps? Where were the all important pink Bunny Peeps? It was several days before I finally found a package of yellow Chicks at a CVS, and the pink Bunnies at a Safeway. Hustling home with my booty, I unwrapped the Peeps and put them on a table with my mini Christmas tree. The scale was perfect. Then I dashed to the local Michael’s craft store and bought styrofoam, scrapbook paper, a tiny dollhouse-sized wooden sideboard, some bits of wood, marbles, itty-bitty package bows and some odds and ends.

A Peepmas Story actually came together much more quickly than last year’s Peepington Crossing the Delaware. Perhaps it was because I learned from last year’s winning entries that in spite of the Post’s somewhat nebulously-written rules, one does not need to mount one’s diorama inside a shoebox. Perhaps it was because the Peepington diorama had a lot of characters, all of whom had to be dressed and posed inside a very small space, whereas A Peepmas Story only had four characters to costume (I was careful to pick fabrics which suited the characters, although there are limits as to how creative one can be in costuming the lump that is a Chick Peep). Altogether, I think A Peepmas Story took only a day and a half to assemble. I used styrofoam to create the living room floor and walls, the all-important staircase and the sofa on which the parent Peeps would sit. I put down a layer of brown foam sheeting for the wooden floor and steps, and covered those with a patterned scrapbook paper that approximated the carpeting from the movie scene. I covered the styro walls with a striped scrapbook paper and mounted the Christmas tree on the left and the mini-sideboard on the right. I covered the sofa in green felt and draped its back with a small knitted doily, then glued it to the right of the stairs. I printed out Peep photos from the internet, reduced them down and made little frames for them, to provide artwork for the walls. I made a teeny dish of clay cinnamon rolls and put them on the sideboard, along with a little whelk shell and a tiny piece of coral I found on the beach years ago. I wrapped half-inch wooden blocks and matchboxes of various sizes in scraps of tissue paper and adorned them with minature ribbons. I partially wrapped a blue marble in tissue and glued it next to the “Dad” Peep (remember he got a bowling ball for Christmas in the movie?), and I gave the “Mom” Peep a mass of tangled reddish hair. To create the “Ralphie” Peep in his bunny suit, I took a pink Peep Bunny, dug out its face and replaced it with the face of a yellow Chick Peep. I clipped the ears off another pink Peep Bunny and glued them onto the legs for big bunny feet, and I made a tiny pair of glasses for “Ralphie” to finish him off. The Dad Peep got glasses, too.

I crumped bits of tissue and glued them around the tree, as if the Peeps had been unwrapping presents with abandon. The finishing touch was a long matchbox, wrapped and beribboned and set beside the little sideboard, representing the all-important Red Ryder BB Gun present. And my diorama of A Peepmas Story was complete. If you want to really appreciate the minutiae, click on the photo.

Proudly, I took several photos of the diorama and emailed them to the Post on Friday, with a return receipt attached, well in advance of the March 2nd deadline. And then I waited. And waited. Finally, I got my return receipt back on March 5th, and my heart sank. If it took them that long to even open my email, the folks at the Post were undoubtedly swamped with entries. And so they were; an article in yesterday’s Post stated that they received more than 800 entries – and the same article stated that the semi-finalists and finalists had been chosen and will be featured in the Easter Sunday edition. I guess they had to make the announcement so anxious diorama designers would leave them the hell alone.

So siiiiigggghhhhhhhh…once again my Peeps were rejected by the Post. I’m fully prepared to be dazzled by the winners when they’re announced on Sunday. John and I are betting that there will be at least one variation on the “No Country for Old Peeps” theme(a serial killer Peep – yeah!). But I admit that I’m disappointed, and I don’t know if I’ll compete again next year. It’s a lot of work, and then when you don’t make the cut, all that work just goes in the trash. I will probably cannibalize A Peepmas Story for parts, though, and I will likely buy some Peeps to stow away, on the chance that inspiration will strike between now and next spring.

And it’s easier to work with stale Peeps, anyway.